The orange and white paint made me think of old rainwear and lifejackets. Maybe that’s why someone got the idea to create a campaign model called “Helly Hansen”? Anyway, this is not the Helly Hansen variant. Just an urban crossover in a fancy color combination.

I think the Captur is somewhere between the Nissan Qashqai and the Citroen C3 Picasso, perhaps more like a Nissan Juke. It seems like a large car, rather tall and wide – but still based on a subcompact car à la Clio.

What does the Captur offer?

A lot of versatility. Large doors with large openings. Plenty of space to fasten toddlers safely into their child seats. Plenty of interior space. The glove compartment is a deep drawer. It reminds me of a modern kitchen drawer. Everything I see and touch, seems solid. The entire interior seems like it can take a beating, too. Should one of the kids get sick on board, it’s good to know that all seat covers are removable and can be cleaned.

But even inside a high-end model like this, there is no premium feel. It feels just like a reasonably priced car with a thoughtful design. The Captur is designed in France and manufactured in Spain. Prices begin at about NOK 220,000, making Captur only marginally more expensive than its brother – the Clio.

When I entered the car for the first time, I noticed that I was sitting in a typical Latin driving position – made for bodies with short legs. Thanks to the longitudinally adjustable steering wheel, I was able to find a superb driving position for Nordic guys, like me. I chose to sit a bit high to get a good overview of the narrow streets I was going to drive through.

Tall and wide. It looks bigger than a subcompact.

On the road, the Captur drives like a large car. You are sitting quite high compared to conventional cars, and you hardly notice the speed, either. I had to keep a constant eye on the speedometer not to drive too fast in the speed-contolled 80-zones around Barcelona where I picked up the car. The top two gears in the 5-speed gearbox are both overdrive, and with Renaults fantastic 1.5 dCI engine, it felt like driving a rather powerful engine. I had to check that I had the 90 HP engine and not the 120 HP. Another factor contributing to the large car feeling, was the suspension. It is comfortable, but not like old times French cars. More like the Qashqai.

I am a bit skeptical to tall, lightweight vehicules when it comes to stability. Will they roll over under a critical evasive action, like when you are trying to avoid a wild animal on the road? I believe that the softer the suspension, the easier it is to feel the limit. A modern tall car may not give that feedback. Therefore, I chose to practice a little on an open part of the road to ensure that the Captur would not roll over too easily. 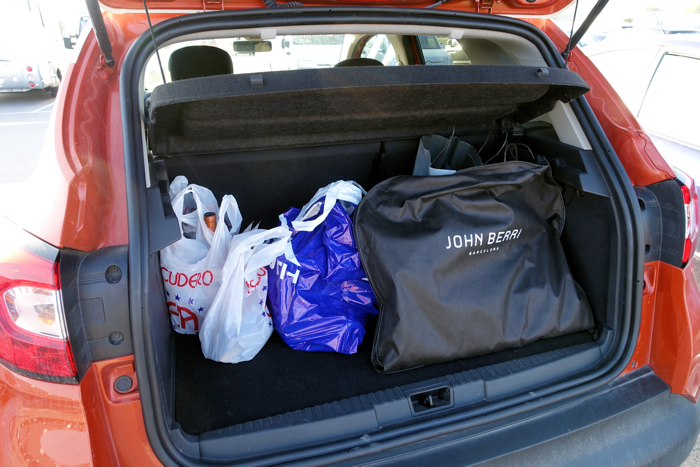 There is plenty of cubik for the luggage if you are able to stack it.

I enjoy the feeling of driving a tall car. I have a superb overview. I like the looks of the car. It looks like a fullsize family car, especially when driving around in the southern France, where family cars are a little downsized compared to family cars on Norwegian roads.

The Captur is in fact a subcompact. That shows when you open the trunk. It is no place for much more than a cabin suitcase and a couple of shopping bags. Just as large as in any subcompact car. The luggage compartment is however divided in two. With the separation plate removed, you get 377 liters – almost as large as in a Volkswagen Golf, – but it is high and shallow, and not as easy to utilize as in a Golf. In the Captur, it is possible to push the rear seats forward to expand the luggage capasity. Great versatility, but still a compromise. You cannot have it all in a car that is barely over 4 meters long.

The Renault 1.5 dCI engine is considered by many as the best turbodiesel ever. I don’t disagree. I am impressed by the lack of diesel sound. 90 HP makes no super acceleration, but the torque of 220 Nm in the RPM range of 1750 to 2500 is good.

Instead of the dCI engine, you may choose a 90 HP 0.9 liter petrol engine. I have not yet tested that engine. It is an interesting option, but I fear that with only 3 cylinders it won’t provide the same fine sound as the dCI engine gives. 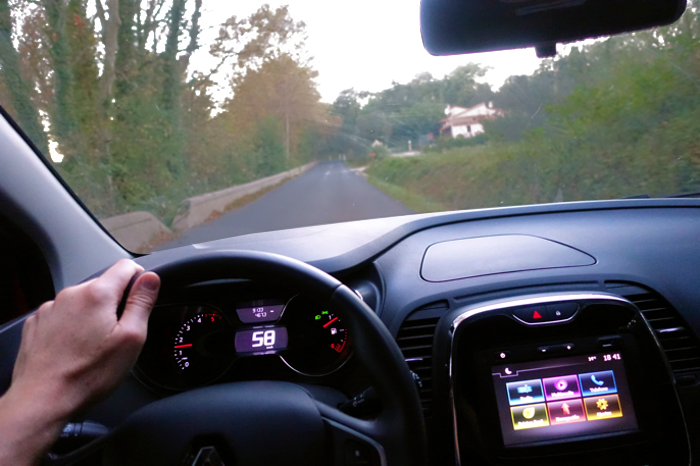 The Renault Captur has marginally weaker security than the Nissan Qashqai, which also originates from Renault. Both have overall good results, but the NCAP report for Captur shows that front seat occupants run a high risk of getting whiplash injuries in rear-end collisions.

According to the factory figures, fuel consumption is as little as 0.40 liters per 10 kilometeres in urban and 0.34 on the highway. Very impressive. I am going to keep the car a few more days, so I have not measured the real consumption, but so far it looks positive.

The Captur is priced marginally above the equivalent Clio – and that means a lot of car for the money. I think trade-in values will be good, because I think there is a good market for tall-built, small family cars. However, trade-in prices for Renaults are not quite as good as current bestsellers like Toyota and Volkswagen.

I am using the Captur as a daily means of transport under some fine autumn days in the southern France. It stands out as exceptionally easy to drive. It works especially well in city driving. The light steering makes it easy to park. It also handles motorway speeds fine. The car’s appearance is appealing, but I would definitely not choose it in orange and white. While we are on the road, we discover several Capturs in other color combinations. My wife prefers a red version with black roof. My choice would be white with black roof.

– Which color would you choose? 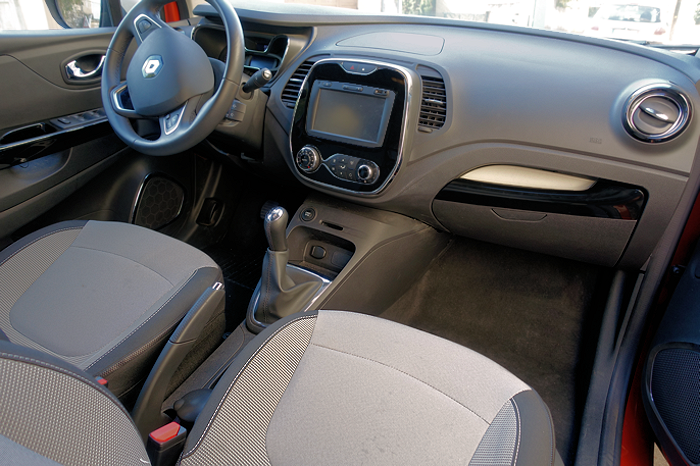 Not very elegant, but solid and durable interior.

Seat covers can easily be removed for cleaning.

The glove Box is big as a kitchen drawer.

An extra storage bin on top of the Dashboard. The lid sometimes popped up by itself.