EU Consumption Figures can be a bit misleading, especially for hybrid cars.

One of the main issues is the way the tests are performed. There are two different driving cycles. The urban driving cycle, – about 13 minutes and 4 kilometers of a prescripted urban driving behaviour. Then, 6 minutes and 40 seconds of extra urban driving, covering a theoretical distance of 7 kilometers. A good hybrid with fully charged batteries could easily pass the entire test more or less on battery power alone. In real life, batteries will be partly discharged and your fuel consumption will be a lot higher. 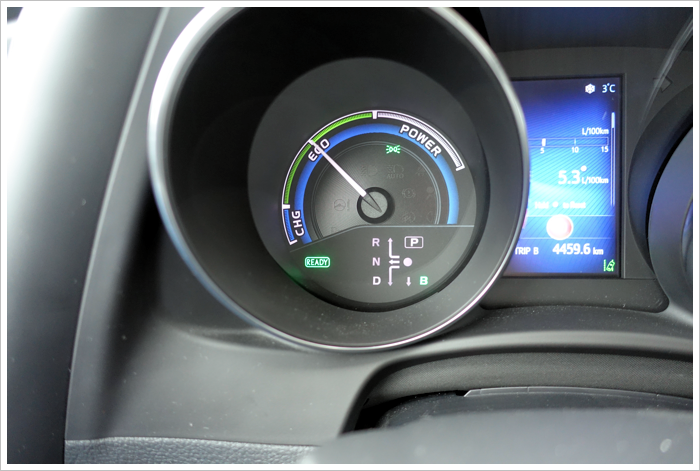 The only way you can charge batteries in a non-plugin hybrid car like Auris Hybrid, is by taking it on the road and drive it. It has regenerative braking. The brake energy is lead back into the batteries. The onboard system decides when and where to engage the electric motor. Everything happens automatically. Just drive as normal.

If you are looking for an affordable hybrid station wagon, you cannot overlook this car. There is one alternative: The 7-seat Prius+ Seven with the same motorization, – the 1.8 VVT-i Hybrid Advance where the 99 HK gasoline engine cooperates with an electric motor of 37 HP. There are simply no other hybrid competitors at the same price that can serve as an everyday family car.

Toyota Auris Hybrid is one of “my” cars. Not for real. Just rental cars I use for various transportation purposes. A typical everyday car. I dislike the CVT gearbox and the Eco driving mode. I might also add that I have never considered taking the long way home. Well, that is not quite true … On Sunday I took the car for a Sunday trip to measure fuel consumption and gain some more knowledge of Toyota’s hybrid concept.

First stage – The highway between Oslo and Drammen came to a complete stop about halfway. Someone had found that Sunday morning was such a fine time for carrying out some road work. In situations like this, the gasoline engine shuts itself down and leaves the rest to the batteries – that is, if they were charged. Dammit! Every time I pick up an Auris Hybrid, the batteries are completely empty. During 50 minutes of road block, the gasoline engine went almost continously at a high and somewhat irritating idle speed. Anyway, I was glad to keep the heater and the defroster alive. The weather outside was 3 degrees and light rain. 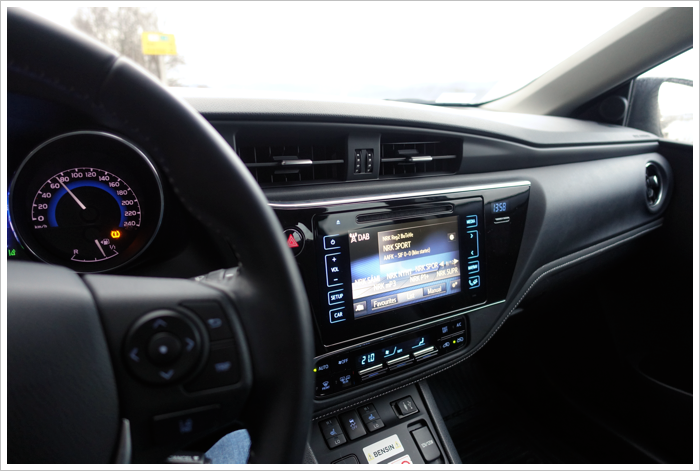 The batteries are recharged when you press the brake pedal – so called regenerative braking. By putting the gear lever in «B», you will get an engine brake that also has a regenerative braking effect. There is a long decent on the highway into Drammen. When I drive electric or hybrid vehicles, I normally use the engine brake to the full extend down the decents to give the batteries a real boost. In Auris, the engine brake is not particularly powerful. I heard the gasoline engine revved up as well, slowing down the speed, but with just moderate or no charge of the batteries. Shame on Toyota! It lets precious brake energy disappear through the exhaust pipe.

South of Drammen I took the old south-bound road to Holmestrand, a small village by the sea. The old road has a speed limit of 70 km / h. It is ideal for economical driving, and best of all, – it is not a toll road, like the new highway. Average consumption had shown 0.53 liters / 10 km on the highway. Even though I had reset the dashboard computer after the long decent. Still it seemed to be stuck at 0.50. The gear lever. Reverse, Neutral, Drive and Brake (engine brake). Park is on a separate button.

I switched the gear lever between “D” and “B”. With the gear lever in “D” it is possible to let the car roll several hundred meters without any assistance from the gasoline engine. Almost no fuel is consumed, but unfortunately the batteries aren’t charged either. Sometimes I chose “B” to reduse speed or hold the car down the hills, and charging the batteries at the same time. I imagine that the hybrid concept works better when there is power in the batteries. The range in EV mode is not very good. It makes it barely possible to pass through 40 and 50 km / h zones. It is a good practice to accelerate carefully from standstill to let the electric motor bring the car up in speed before the gasoline engine takes over.

I was not particularly pleased with the average consumption when I turned into the harbor of Holmestrand. 0.52 liters per 10 km was way too high. I had driven at steady speed between 70-80 km / h. I had been very careful neither to press the accelerator too quick nor too hard, especially when picking up the rpm after rolling freely. If you press the pedal too quickly, the CVT gearbox revs up the engine more than necessary to maintain the pace. I think Toyota’s CVT gear box is too nervous. A double clutch gear box solution would have worked better. A lot better. 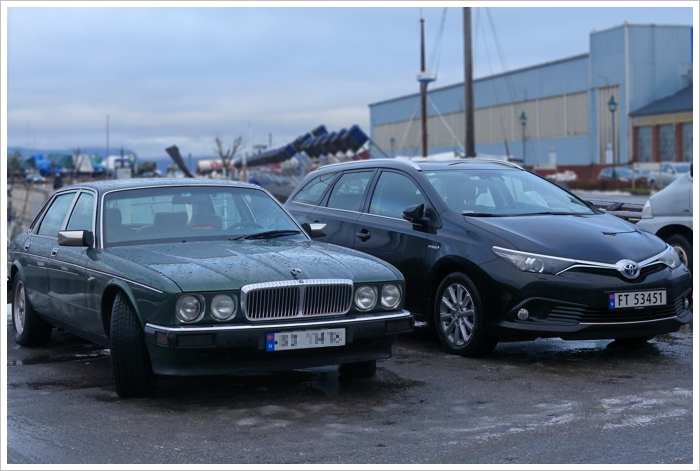 I parked beside another British car.

The ice-free harbor in Holmestrand is a terrific offer for boaters. It is nice to stroll along the harbor street. The northern wave breaker is shaped like a fishing pier, filled with recreational fishermen. The cod is delicious at this time of the year. 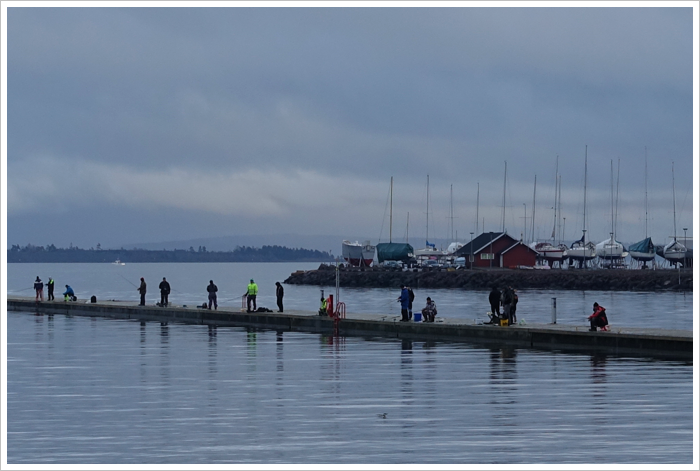 Fishermen side by side on the wave breaker.

Auris is a compact family car. The luggage space is not particulary large. The loading area is a little narrow, though. Compact cars nowadays are just as large as middle family cars were 10-15 years ago. On the road, the weight distribution feels good. Inside, there is enough space and comfort to call it a family car.

I reset the dashboard computer before I started my way home. Average consumption seemed to stabilize at 0.42 liters / 10 kilometers. For the first time, I chose to take the “long way” home with the Auris. I followed the coastal road from Sande via Svelvik to Drammen. This road is also speed-regulated, but more winding than the road I took on my way down. I stopped a few places to take some photos. I spotted other people doing the same. Some took selfies against the fjord in the gloomy and idyllic winter light. Idyllic scenery looking across the fjord.

I noticed that the Auris automatically switched to electricity around the small coastal village Svelvik. I obviously had plenty of battery power. My “long” trip from Holmestrand to Drammen was conducted with an average consumption of 0.44 liters per 10 km. The highway between Drammen and Oslo at a constant speed of 100 km / h was traveled at 0.53 liters per 10 km. I think Toyota could achieve better consumption figures if the engine brake had better effect, and the gearbox did not let the engine rev so unnecessarily high. I think the hybrid power train of Volkswagen Golf GTE works better and is a lot more pleasant to drive, although real consumption figures are the same

Well, hybrid cars do not pollute when driven through urban areas. That is good, but the most important reason for me to choose a hybrid, is the fine torque you get when both the gasoline and the electric motor work together. It actually gives some driving pleasure, – assuming you do not touch the “Eco” button.

It will drain the last bit of fun out of the Auris. 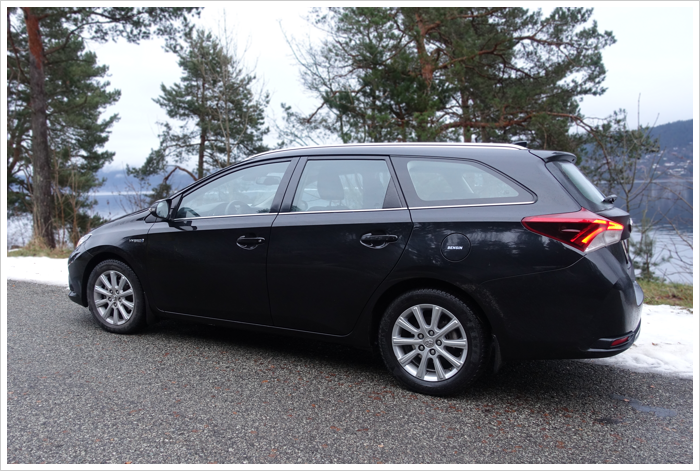 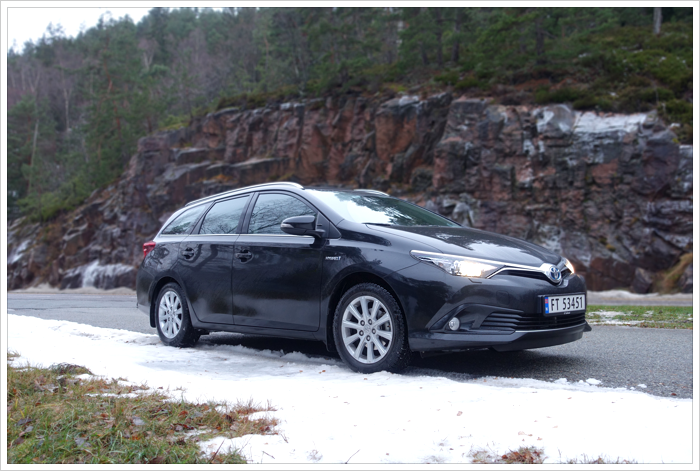 It looks good in black. 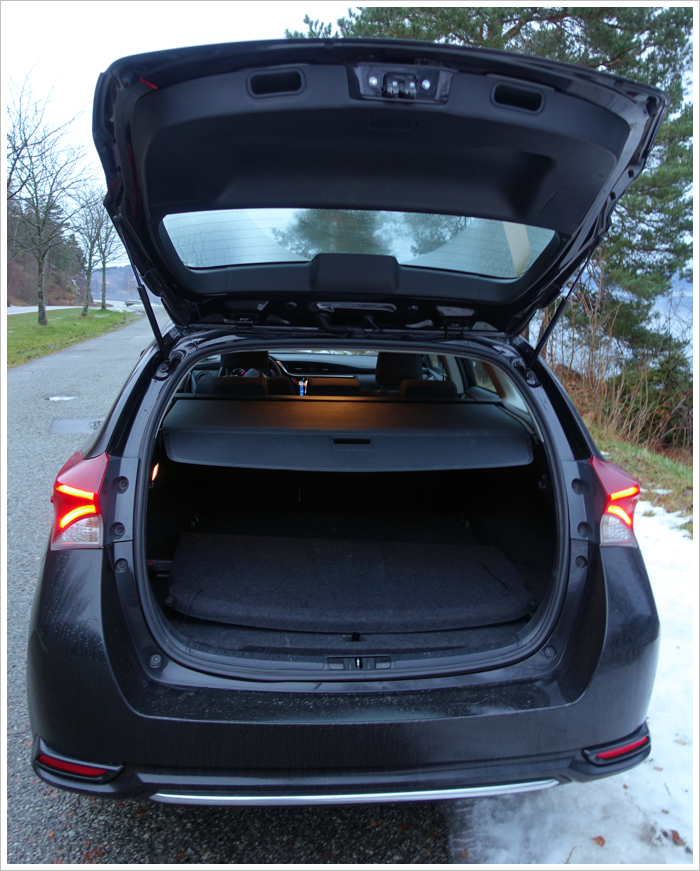 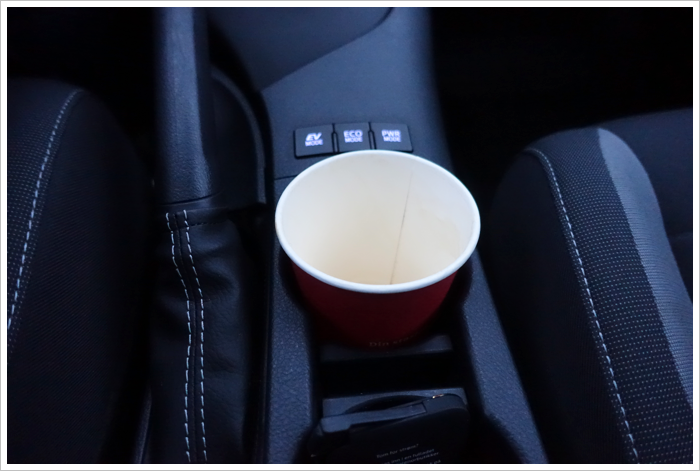 The trip is over and so is the coffee …

This site uses Akismet to reduce spam. Learn how your comment data is processed.