I cannot say that the V60 is a premium car, – nor a roomy stationwagon. Nevertheless, it has some good Volvo qualities.

A weekend with a Volvo stationwagon is no bad weekend. I must admit that for a man who grew up with great Volvos like the PV and the Amazon, it feels a bit special to drive a Volvo. Though the V60 is anything but a retro design. It is a modern car that challenges the Audi A4 and BMW’s 3 Series.

I lifted the seat a little, adjusted the angle of the seat cushion and raised the backrest a bit. The lumbar support was perfect. I expected nothing else than a perfect seating position. After all, this is a Nordic car built in the Torslanda plant in Gothenburg, Sweden, for tall and blonde guys like me.

Before I put the key into the ignition slot, I got the feeling of a slightly outdated cockpit. Somewhat small and deeply located instruments, and a center console with too many buttons? I think all that belongs to the past. It is more than 10 years since Volvo was awarded a prize for its special center console design. When I turned the ignition on, however, I discovered that the instruments were a digital screen – all digital like a computer. That raised my impression considerably.

Compared to its competitors, I would not describe the interior as premium class, – at least not in the basic version I drove, with fabric seats. Yet, there was something honest, solid and robust over it – in a typical Volvo manner.

The exterior design is also very Volvo. The V60 has continued the style of the V50, and got a front quite similar to the V70. I like the facelift made in 2014. I also like the rounded rear end. The designers have obviously put more emphasis on style than space.

When it comes to the overall impression, I’m left with mixed feelings. On standard 16″ wheels it looks a bit dull, and when parked along with other typical family cars, it looks kind of small. Yet, I cannot deny that I get a good feeling knowing that it’s a Volvo. 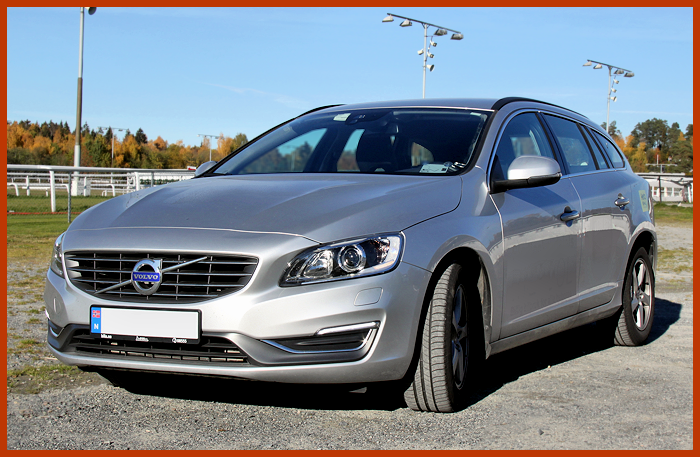 A 1.6 liter turbodiesel with 114 horsepower and a torque of 270 Nm doesn’t sound much. But believe me, the high torque makes the small engine feel more powerful on the road than on the paper.

After a few kilometers, the Citroen C4 came on my mind – a car I have spent much time in, lately. The engine in my V60 is a result of a joint venture between the PSA Group (Peugeot and Citroen), Ford and BMW. It’s a legacy of the days when Ford used to own Volvo. For Volvo’s 2016 models, the D2 engine is now replaced with a new engine developed by Volvo. It has 120 horses, but on paper quite similar characteristics as the outgoing engine.

Volvo has chosen a six-speed manual transmission that is perfect for Nordic speed limits. You’ll have to use the shift lever a little to get the best out of the engine, but it pulls nicely in 6th gear from 80 km/h (50 mph) and up.

I noticed that the V60 felt more like a compact car than a fullsize car. Furthermore, I also noticed that the height difference between the throttle and brake felt somewhat higher than what I’m used to.

At once, I was not impressed by the comfort in V60. I knew that the seats are the car’s biggest asset. Well, it turned out that I could sit effortlessly behind the wheel for several hours without feeling any discomfort at all – something I would characterize as a kind of discrete comfort. The comfort is there alright, but you don’t think about it.

The sound inside the cabin was influenced by quite charmless engine noise. It got better from 80 and upwards with the sixth gear engaged. The suspension is a bit firm but far from uncomfortable. I think it must have been the suspension that made me feel that the V60 drove pretty much like a compact car.

I usually don’t focus much on on luggage space in the cars I come across, but I cannot write about a station wagon without touching this subject. The V60’s body style reveals that there is not too much luggage space. It is particularly the opening that might cause a problem when trying to load large items. I barely got room for my terrain bike with back seats folded down. The biggest problem was the width of the back door. It was actually easier to fit the bike in a Golf wagon/SportWagen.

The trunk is however easy to operate for more manageable objects. It’s easy to fold down the back seats to a complete flat floor. It is easy to secure the load from sliding forward, in typical Volvo fashion. I also liked that the window pillars were covered with washable hard plastic on the inside – and not fabrics. Then it looked fine inside, even after I had transported my terrain bike home after having used it in the mud.

According to NCAP, the V60 is on the same level as the Audi A4 and the BMW 3 Series, – all placed in the top league when it comes to safety. You can order your new V60 with Lane Departure Warning and Blind Spot Alerts, but not Adaptive Cruise Control.

With a starting price of NOK 360,800, the V60 is placed exactly in the same price range as its premium class competitors. Secondhand values are extremely good, even for models before the 2014 face lift. To ensure a good resale value, I would order my V60 with slightly larger wheels. I also recommend the extra equipment that were installed on my test car, like Parking Sensors, Towing Hitch, All-Digital Instruments and Automatic Lights.

The PSA turbodiesel engines have been around for a couple of years now, and they are well known for low consumption and durability. They can easily do 300,000 kilometers (187,500 miles) without major problems, not only in Volvos, but also in cars from Peugeot, Citroen and Ford.

I think Volvo’s D2-engine is the best choice in terms of economy.

The V60 is honest, simple and robust, – everything that we associate with Volvos.

• Small luggage to be a stationwagon

This site uses Akismet to reduce spam. Learn how your comment data is processed.